All games can be replayed using the PGN viewer by lichess.org (unless otherwise noted).

PGN viewer by lichess.org. To replay an entire game, click on the arrows beside the chessboard, or click "Open" to go to the board with more options on the lichess.org site (including the option to download the PGN for the game). To replay a game from Black's perspective, just click on the hamburger icon [three vertical lines] and choose 'Flip Board'. Note: You don't have to sign in to lichess.org to replay a game. More information about PGN viewers is available on a separate page.

Online Lichess Games: May 2022. When you click the Open button on a diagram, you can replay the game and benefit from the analysis by lichess.

April 24th, 2022. Bob Lutz competed in the 2022 Maine State Open Championship tournament; here is one of his games that ended in a draw. Should he have played on? You be the judge. 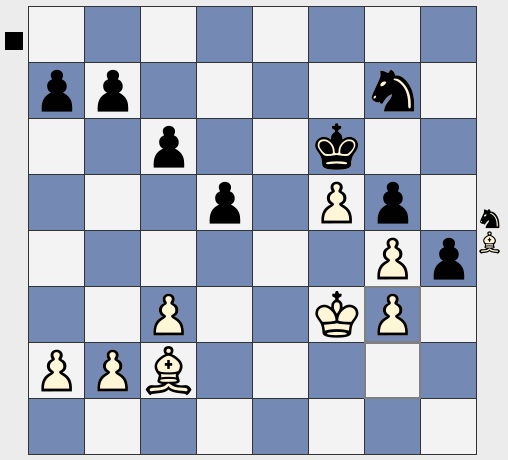 Black to play; what is the best move?

04/24/2022. White maintained a slight advantage until the major pieces were exchanged. In the endgame, Black was in the driver's seat (despite making a few significant missteps, a.k.a. blunders). My theory is that White realized she was in trouble and offered a draw.

Online Lichess Games: April 14th, 2022. When you click the Open button on the diagram, you can replay the game and benefit from the analysis by lichess.

Online Lichess Games: April 7th, 2022. When you click the Open button on the diagram, you can replay the game and benefit from the analysis by lichess.

Online Lichess Games: March 31st, 2022. When you click the Open button on the diagram, you can replay the game and benefit from the analysis by lichess.

What better way to celebrate St. Patrick's Day than playing a few exciting games of chess? Three of us played online on Thursday night (one victory apiece, plus this drawn game).

03/17/2022. White starts off with a double fianchetto and early King-side castling. "The King's Fianchetto Opening or Benko's Opening (also known as the Hungarian Opening, Barcza Opening, or Bilek Opening) is a chess opening characterized by the move: 1. g3." - Wikipedia Black held his own until the very end; this exciting game ended in stalemate. Check it out!

Most of us have good days and bad days (except for Arnold, of course). Every once in a while you play so badly that you contemplate giving up chess and taking up something else (or just hiding in a corner). 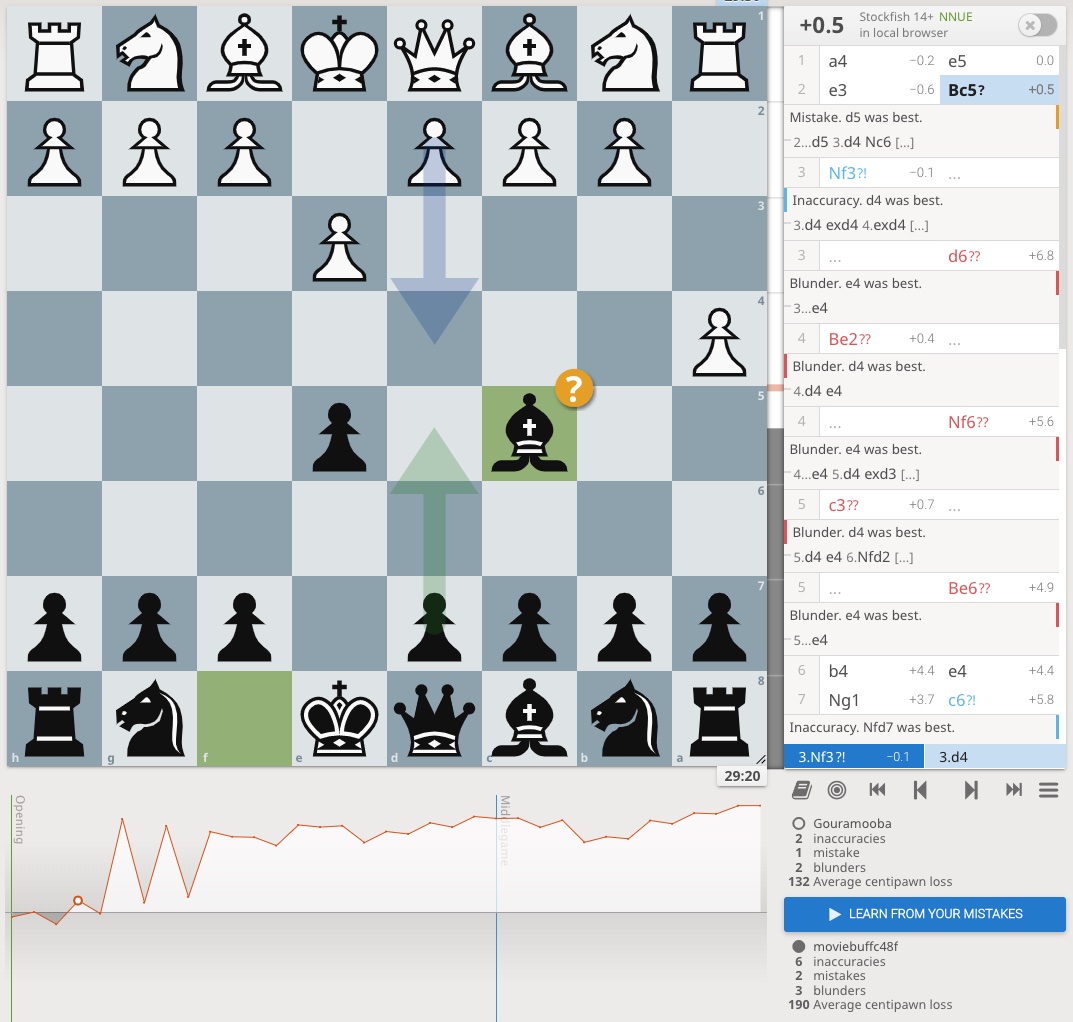 Not my best game

03/03/2022. This game started off bad and just got worse; I was not having a good day. Stranding my dark square Bishop early [a variation of the Noah's Ark Trap] wasn't bad enough. I didn't even see the mating threat at move 17! As I learned from the Stockfish analysis of the game afterwards, I had made 3 blunders, 2 mistakes and 6 inaccuracies. Not good.

While I was licking my wounds, I came up with the idea of a virtual emotional support animal (for those times when you feel like beating yourself up after making a really bad mistake or a blunder). I was inspired by the cat picture in my Zoom background image to provide Bob Lutz with a virtual emotional support animal [VESA] after he lost his games against Arnold. We don't have a name for it yet [suggestions so far: Passed Paws, Hairball]. I found a number of other images that might also serve the purpose. Feel free to suggest a name or provide an image for us to consider. Most games end in defeat for one of the players, so the more emotional support animals, the better. 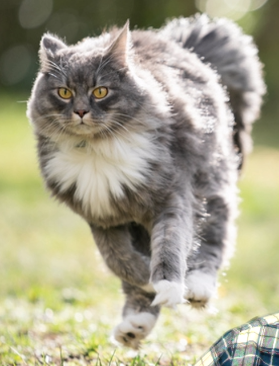 Apropos of discouragement, I ran across a video the other day which made me feel better about losing so many games in my quest to improve my chess playing.

Games: February 14th to 24th, 2022. It has been an interesting and busy time for the club recently. We had a good crowd on Valentine's Day; here are games between Don and Bob Leach (who has resurfaced after being out of the chess world for several years), Don and Arnold (a regular adversary) and Don and Ed Hatch (rejoining us in our new era). 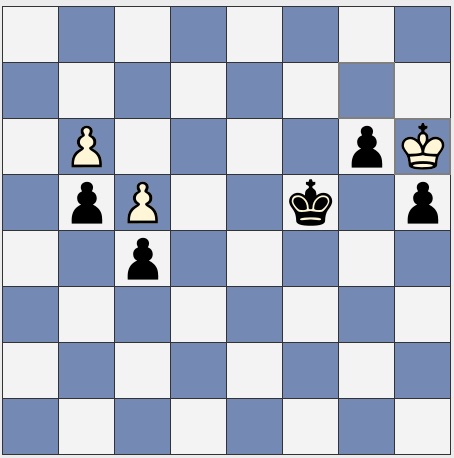 Black to play and stalemate!

02/14/2022. No matter how many times I tell myself to slow down and look before moving, when the blood is up it is so easy to just move quickly. And that's exactly what happened at the end of this game: stalemate! 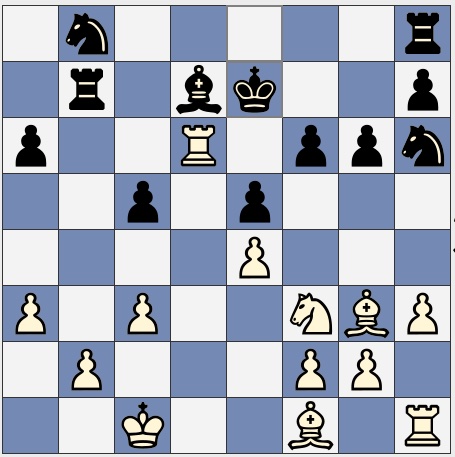 White to play and win material

02/17/2022. White started out with the London System; Black responded with a line of pawns on his third rank before moving his Queen's Rook up to his second rank. Unfortunately White missed a golden opportunity to win material at the beginning of the middle game. Later White blundered a piece and lost his focus!

barre53 vs. moviebuffc48f - B20 Sicilian Defense 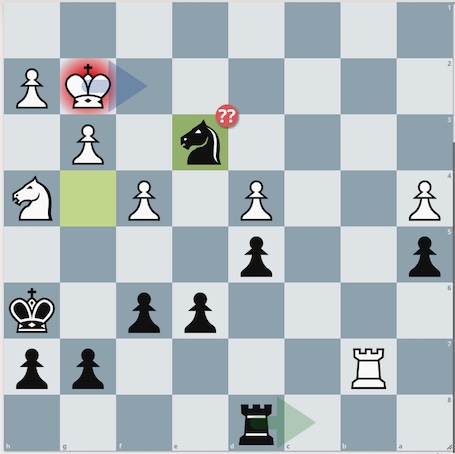 Black Loses Steam in the Endgame

02/24/2022. Black did rather well with the Sicilian Defense right into the endgame, but failed to capitalize on his superior position (by exchanging his remaining Knight). White stayed focused on his passed pawn and won the Rook vs. Rook endgame (with split pawns and doubled pawns); Black failed to catch White's passed pawn, which cost him the game.

Online Lichess Games: February 10th, 2022. Bob Lutz and Don played Arnold online Thursday! Bob and Don also played one game; Arnold wound up playing the same opening against both of us: the Valencia Opening. We all managed to blunder [but I had the most blunders: 5]. You can learn a lot by looking over the games; afterwards I ran the computer analysis for all three games. Arnold sometimes disagrees with the computer analysis, but I find it very helpful to identify where and how I went off the rails. When you click the Open button on the diagram, you can replay the game and benefit from the analysis by lichess. We did not agree on which of the three games was the most interesting. You decide.

Online Lichess Games: January 13th, 2022. I'll spare you my commentary for this set of games. Every time I play Arnold my chess rating goes down a few more points! They say you learn more when you lose a game; so I must be learning a lot. You can learn a lot by looking over the games, too. When you click the Open button on the diagram, you can replay the game and benefit from the analysis by lichess. In theory, if I go back over the games, noticing all my blunders and questionable moves, my future games should avoid these weaknesses. 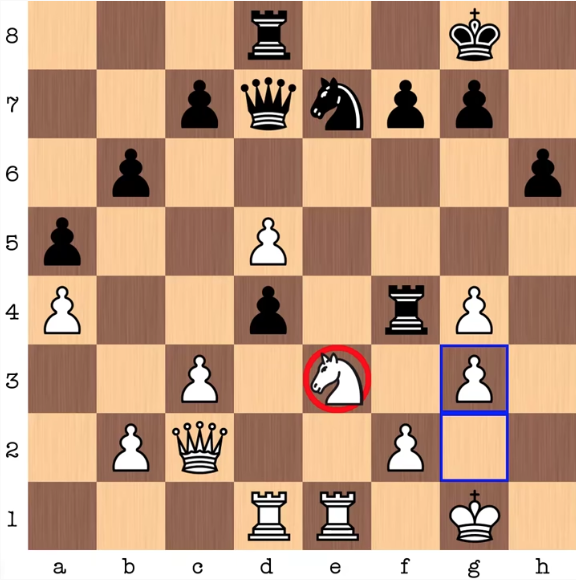 In Game 11, Ian [playing White] advanced a pawn to threaten Black's Rook but left his own Knight on e3 vulnerable to capture without compensation.

Here are relevant links to ChessNetwork videos analyzing all the games: 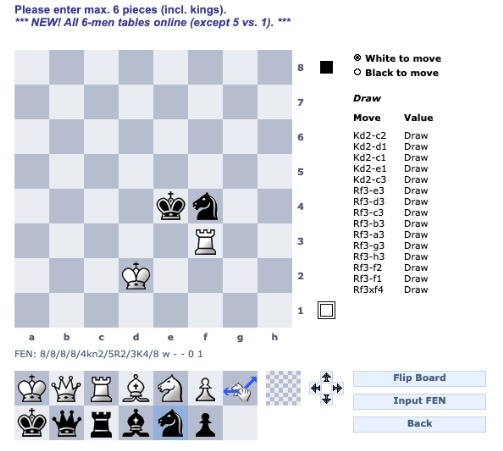 We have not been recording the moves from our casual games lately (so we play a lot more games, but it is not possible to do any analysis afterwards). One of the great things about playing over-the-board chess is that we get to discuss the games afterwards. Arnold explained to us why he knew our game was a draw (even though I thought White might have been able to win with the Rook). In the endgame tablebase diagram above, White offered a draw before making his move.

Here are some relevant links to videos and an article about the rook vs knight endgame:

This endgame is just one of a series of pawnless chess endgames. You can learn more about endgames (and get some practice) on Chess.com in the Puzzles section.
If you want to review endgame positions from your own games, consider visiting the Knowledge4IT web site. 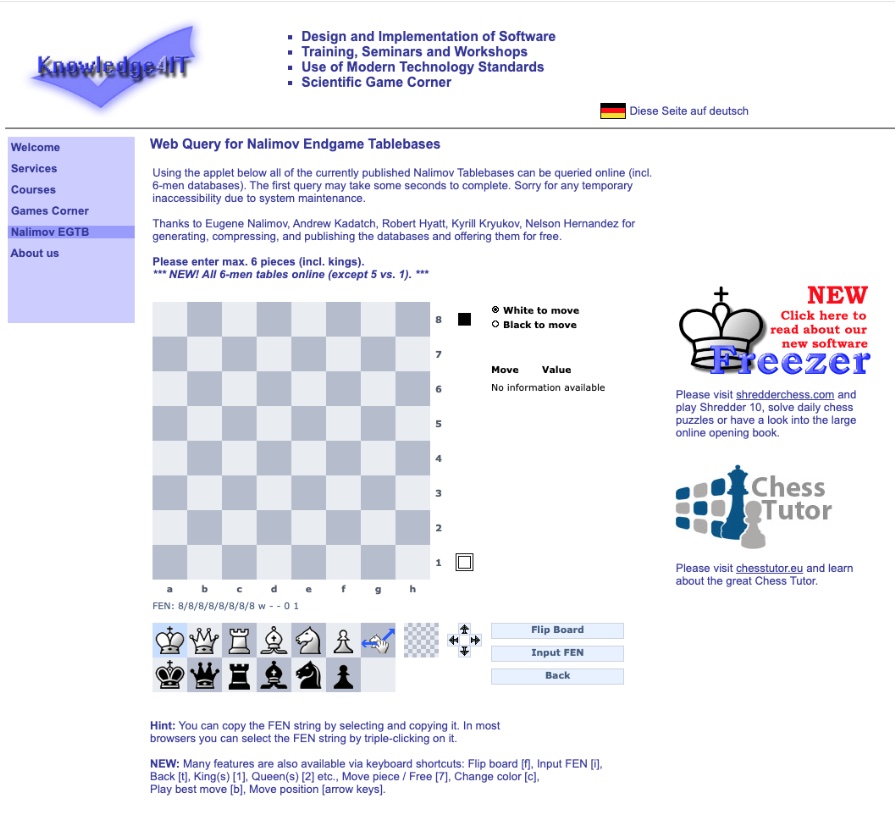 We have not been recording the moves from our casual games lately (so we play a lot more games). This time, I have decided to share a Lichess Study of a game between Magnus Carlsen and Viswanathan Anand that highlights a missed opportunity. For the video explaining Anand's tactical blunder, go to the "Info" tab, open the Chessfactor button and click on the link for "Useful Tips to avoid Blunders".


Here is the move Anand should have played after Carlsen moved his King to d2. 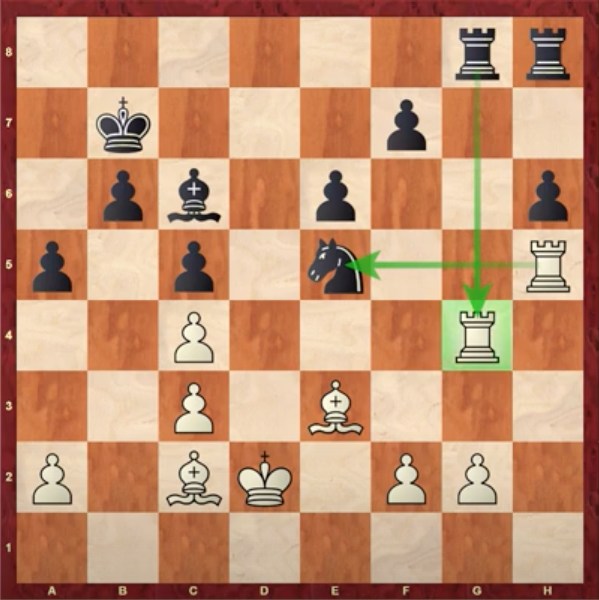