I have been experimenting with using different PGN viewers to share club games. They are listed here in order of preference (including programs used offline to do analysis).

Note: Something went haywire in the lichess.org PGN Viewer recently; I'm not sure if the problem was on their website or because of something on our website, but there is a workaround (described below). The issue was corrected fairly quickly but if it returns, use this workaround! 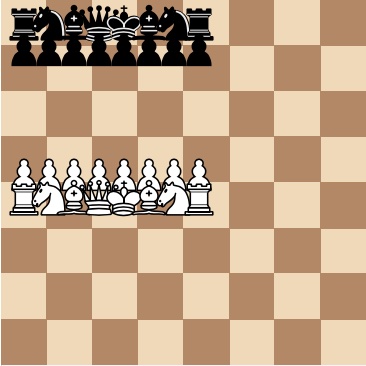 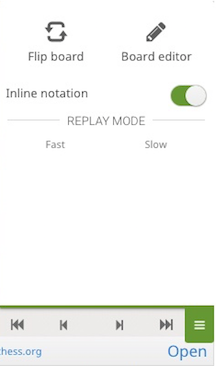 Workaround: To replay the games with the symptom shown in the diagram on the left, just click on the hamburger icon [three vertical lines at bottom right], choose 'Flip Board' until you see all the pieces on their appropriate starting locations (with the color of your choice at the bottom of the diagram) and finally click the hamburger icon to return to the move list. 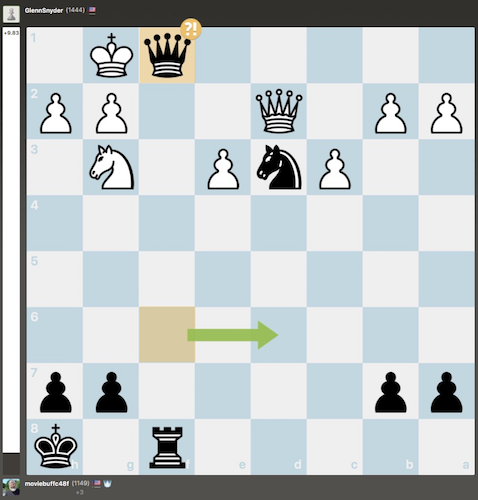 Example: May 18 - June 28, 2020 Correspondence Game! Glenn Snyder and I have been playing three games simultaneously on chess.com since mid-May; not sure how that happened. This is the first one to end [with a thud for Black]. This is another game that showcases a strong gambit for Black: B01 - the Scandinavian Defense: Blackburne Kloosterboer Gambit. The Scandinavian Defense is supposed to be strong for Black, but this game shows that I have a ways to go before I can play it well. I made a number of questionable moves (3 inaccuracies, 1 mistake and 2 blunders, according to chess.com's helpful analysis); in the diagram above, I lose the exchange when my Queen captures the Rook, giving check. Against a solid player like Glenn Snyder, you really can't afford to make such rookie errors!

Click on the diagram to see the full game using the GameKnot iChess viewer. For the most aesthetic experience, click on the "Interactive" link near the top of the page, then scroll down (on the viewer page that opens in a new window) for controls (or use the arrow keys) to walk through the game. 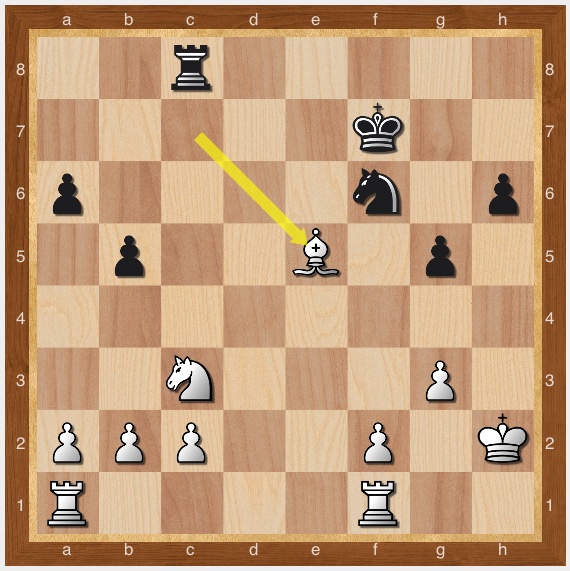 Example: April 6, 2020: Black to move (spitefully). John 2 and I have continued our texting tournament with this game (a B01 - Centre Counter Defence). We were trying to use chess.com to play, but a technical problem on John's end started a game for me with another opponent. So I wound up playing a simultaneous exhibition (losing both games, in case you are curious)! I updated a ScidvsMac window on my computer with John's text moves and swapped to the chess.com window to play Arnold75 (who was in serious trouble before I made a series of blunders trying to pay attention to both games simultaneously). A large part of the problem for me was logging in and out of my cell phone because the screen locked me out after 1 minute [I have subsequently figured out how to increase the time to 5 minutes]. Even though I lost the game, I'll have to admit the mate was nice. The fork felt pretty good at the time, too.

PgnViewerJS is still under review but is not used by this web site. PgnViewerJS has several advantages, but has two small flaws (so far, such as a flurry of about 8 alerts that pop up when you first arrive at the page; I need to click the Continue button until they stop]. "PgnViewerJS was born as the third or fourth attempt to get a nice PGN viewer for our chess club web site. PGN stands for Portable Game Notation which was born in the late 80s, early 90s of the last century. I provided some of the translations there ...
I first started using pgn4web and others as part of our Wordpress Installation, but I had difficulties here and there. At the end, I wanted to have a viewer that was at least as nice as the one from chess.com (later: from lichess.org)." - Markus Liebelt

NO LONGER USED. Caissa's Web PGN Viewer is excellent, but only works for web pages that are not "secured by encryption". For an explanation of why this matters, check out an article by Cloudflare: Why is HTTP not secure? (which explains the difference between HTTP and HTTPS). We transitioned to HTTPS and no longer use this viewer; instead we have provided the PGN (at some point we will provide these games with a different viewer). 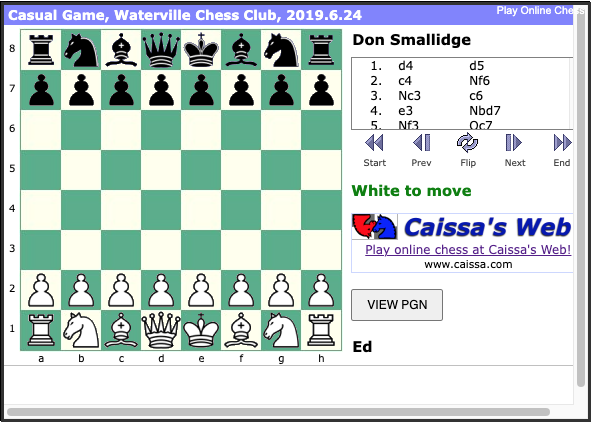 Example: June 24, 2019. Ed won this Queen's Gambit Declined, Marshall defence game; see if you can spot where I get into trouble and how Ed capitalized on my mistakes to win the game.

OFFLINE. ScidvsMac [ScidvsPC] is the primary program I use on my Mac to review games I have downloaded; this the tool I use to create most of the images that represent a critical point in the games I am sharing on the website. This program is available for Mac and PC and Linux]: Shane's Chess Information Database is a powerful Chess Toolkit, with which one can create huge databases, run chess engines, and play casual games against the computer or online with the Free Internet Chess Server. It was originally written by Shane Hudson, and has received strong contribution from Pascal Georges and others. 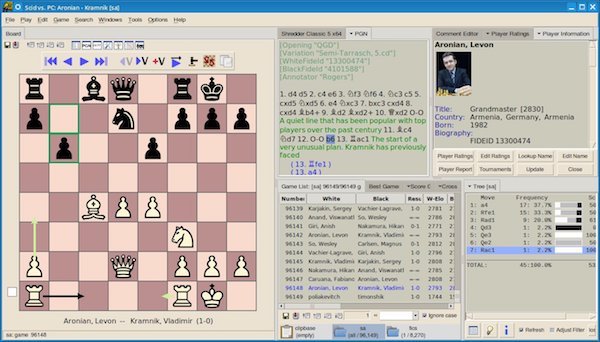 OFFLINE. This program is available for Mac, Windows, Linux, iOS and Android. Stockfish is a free and open-source chess engine, available for various desktop and mobile platforms. It is developed by Marco Costalba, Joona Kiiski, Gary Linscott, Stéphane Nicolet, Stefan Geschwentner, Joost VandeVondele, and Tord Romstad, with many contributions from a community of open-source developers. Unlike most chess engines, Stockfish is open source (GPL license). That means you can read the code, modify it, contribute back, and even use it in your own projects!

Stockfish for Mac supports opening, browsing, and saving multi-game PGN files. Note that it does not support variations or commentary, and these will be stripped out of PGN files that you open with Stockfish for Mac. You can open a PGN file just as you would open any other file on your Mac. You can step through the game and analyze the game as described above. If the PGN file contains multiple games, the list of games is displayed in a sidebar on the left, and you can select any game to view it. You can also save PGN files using File > Save. 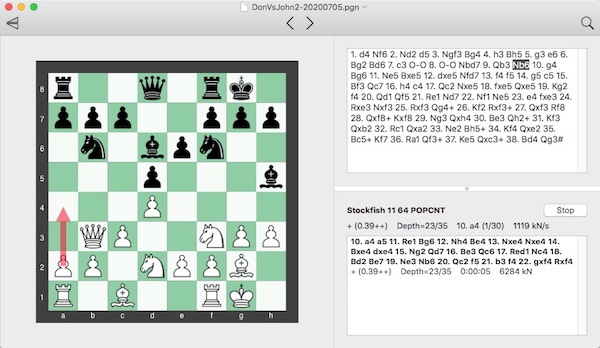 ONLINE & OFFLINE. This program is available on the web (and for Mac, Windows and Linux): Shredder Computer Chess. The Shredder chess programs by Stefan Meyer-Kahlen provide a game playing and analysis tool for everybody and are accepted as one of the best chess programs of the world. Since 1996 Shredder has won nineteen titles as World Computer Chess Champion which makes Shredder the most successful chess program ever. Get Shredder and other chess software, free chess download, online chess and information and news about computer chess on their site. 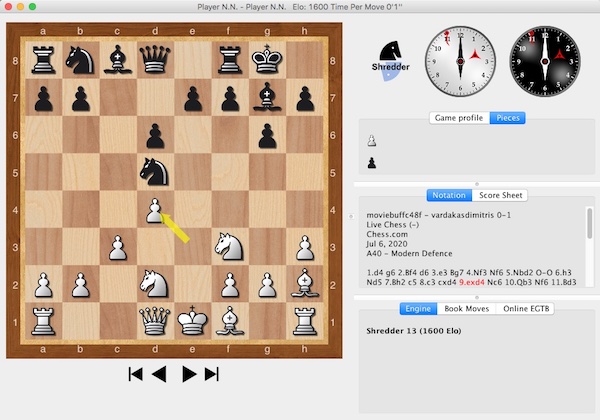 ONLINE. This program is just a small part of a web site that provides tactics training, opening training, endgame training and provides a platform to play chess online. They have a 3 million game database and a "Guess the Move" feature that allows you to "Play the side of a GM in selected master games, and get scored based on how well you play compared to the master." ChessTempo. 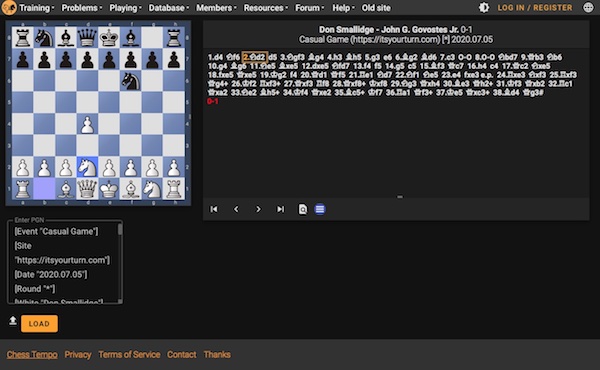 RESEARCHING. This program is available for PC only: ChessBase. This is a very popular program among serious chess players; I don't have a PC, so can't speak to it, but we have several club members who swear by it. Apparently it is also available online [for a fee after the first three months]. I am trying it for free to see if their PGN viewer would be of use to the club [and whether it is available on the online service].

The game in the diagram below is available by clicking the Replay link on the Maine Chess Association web page. 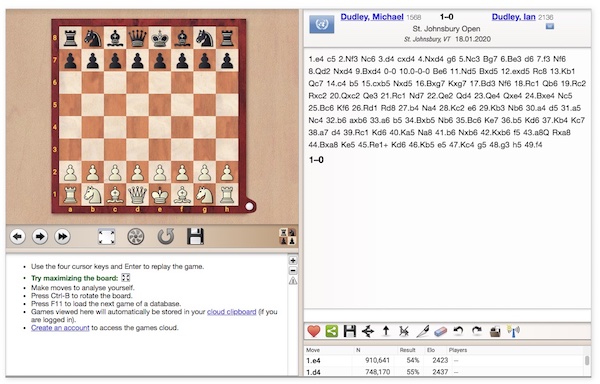 RESEARCHING. This library is available for programmers: JS PGN Viewer. This is technology that a programmer could use to enhance their website. I am evaluating this as a possible alternative for games that are recorded manually rather than captured by chess.com or lichess.org (e.g., Its Your Turn games). An example from the developer's page is shown below. I have not learned how to use it yet; it appears to be written in Python (which means it could be a long time before I get to it). 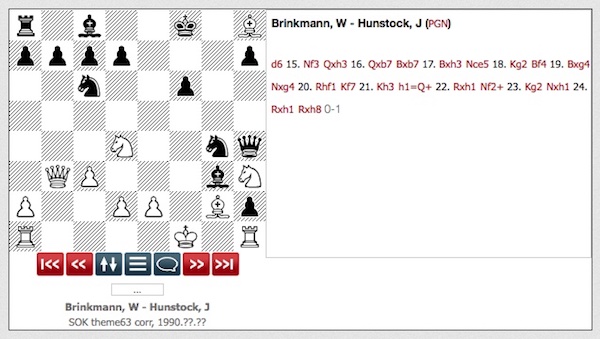