All games can be replayed using the PGN viewer by lichess.org (unless otherwise noted).

PGN viewer by lichess.org. To replay an entire game, click on the arrows beside the chessboard, or click "Open" to go to a larger board with more options on lichess.org (including the option to download the PGN for the game). To replay a game from Black's perspective, just click on the hamburger icon [three vertical lines] and choose 'Flip Board'. Note: You don't have to sign in to lichess.org to replay a game. More information about PGN viewers is available on a separate page. 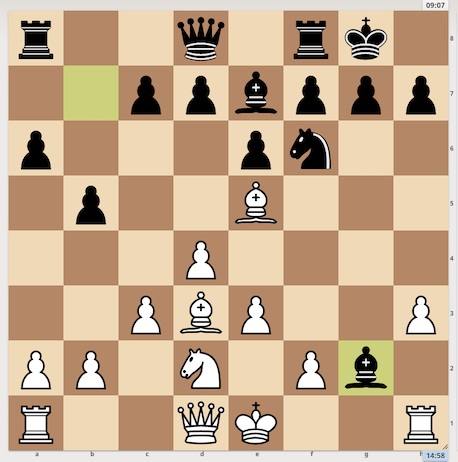 March 11, 2021: White to Move. I started playing the London System in an online game, but my opponent responded with very unorthodox moves, characterized as Queen's pawn game [A45] by 365Chess (a.k.a. the Indian Defense according to lichess). White missed a series of strong early mating attacks and eventually lost the initiative [mostly by not recognizing attacking opportunities]. Both players blundered often, but Black prevailed in the end. Heart breaking for me, playing White! Can you spot the early victory I missed? 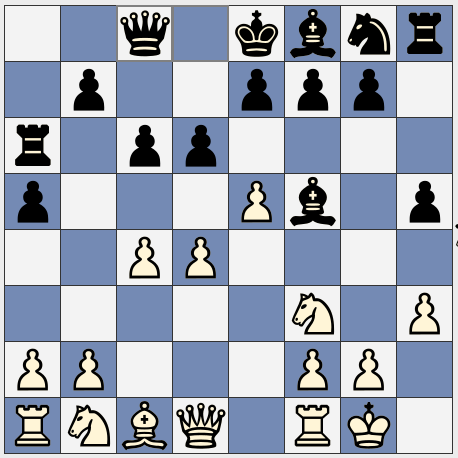 March 8, 2021: White to Move. Arnold played the Ware Defense [B00] (a.k.a. the Corn stalk defence) at the online club meeting Monday evening. White gave up a Bishop for a Knight right away, but allowed Black's Bishop to tear into the castled King's pawn shelter very early. Exchanging Queens shortly afterwards led to an exciting middle game. In the diagram, White is about to get invaded by the Bishop and Queen. Hope springs eternal for White (even down two pawns), but in spite of some tantalizing possibilities, he once again goes down in flames. 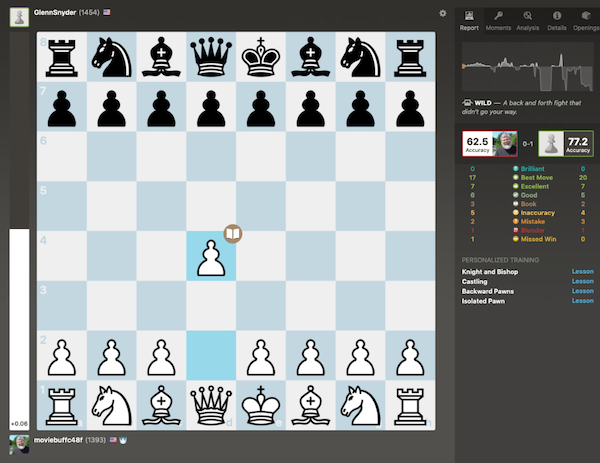 Jan 14 - Feb 24, 2021: Correspondence Game! Glenn Snyder and I playing another instructive game on chess.com this year. Another attempt by me to use the London System: D00 - Queens Pawn Opening Accelerated London System. We both made a number of questionable moves (according to chess.com's helpful analysis in the diagram above); as you can see, White has a clear advantage by moving first. Looking back over the game, I found a number of moves that seemed to be at odds with the opening's philosophy. At the time, cramping the Queen's Knight and opening the Queen file seemed like a good idea. In the event, these choices probably ceded the initiative to Black. And a few of the moves were clearly just mistakes. Against a solid player like Glenn Snyder, you really can't afford to relax your concentration for a moment! 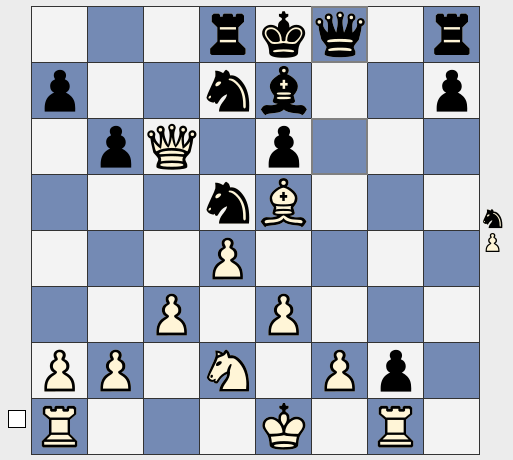 January 18, 2021: White to Move. Don and Arnold played the English Defense [A40] (signaled by b6, preparing to fianchetto the Bishop) at the online club meeting Monday evening. White started playing the London System, but got knocked off course in his move order responding to Black's Nf6. Exchanging his light-square Bishop led to early material advantage for White. In the diagram, White is in a commanding position (but failed to capitalize on his situation). This early mistake turned out to be very costly (not to mention later mistakes). 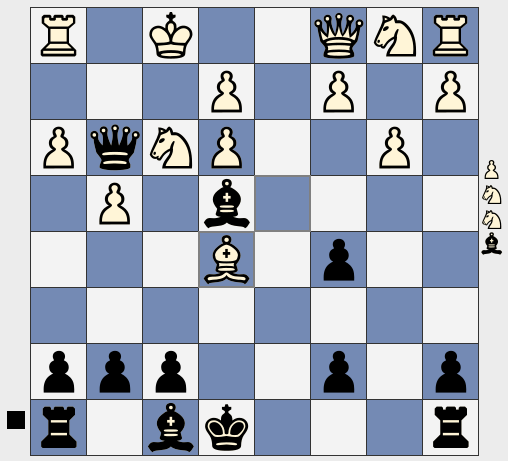 Black to Move - This is what premature Queen development looks like!. Full Game Below.

January 4, 2021: Black to Move. Black responded to the Nimzo-Larsen Attack (Modern Variation) [A01] at a recent online club Friday evening meeting. Black sacrificed a Knight for an early attack, but did not follow through, leaving his Queen in a box; see how Black continued from the position in the diagram (and send condolences to me for losing my Queen so early in the game).